If we talk about crispy bread, many may think of a card-size bread coated with butter before being baked and sprinkled with sugar. But for the business of Benz – Songwoot Yueakyen, an alumnus of Culinary Arts and Kitchen Management Program, Dusit Thani College, the crispy bread that makes steadiness and future for his life is invented with his own knowledge developed from the mix of DTC’s fundamentals and his experience. The innovative creation becomes the newest category of crispy bread in the world which is called “crispy chewy butter bread.”

To compare the ordinary sprinkled crispy bread with this crispy chewy butter bread (so called “crispy milk bread”) under the brand “BenPan Bangkok,” the main difference between them is “chewiness.” What is on the top of crispy milk bread is not only butter but also milk as an ingredient. With his special cooking technique, Benz creates a crispy, chewy, mouthwateringly fragrant milk bread. Currently, there are 13 flavors of BenPan Bangkok’s crispy milk bread sold in the market.

Apart from the rich flavor of his crispy milk bread, Benz also has rich stories before his success. He revealed that “When I was young, I considered myself a poor boy. I grew up in the midst of shortage, so I worked while studying to pay for my tuition fees. I was a tutor, a direct salesman, a merchant selling hundreds of stuff that someone called me a young jack-of-all-trades. The reason why I could study at Dusit Thani College was I relied on Student Loan Fund. I would like to express a big gratitude to this organization. Without it, I would not have studied at Dusit Thani College, and this led to the loss of crispy milk bread existence. Receiving funds from this organization provided me more time to focus on studying, internship, and doing things other than earning money for tuition fees.”

Starting from poverty, Benz had fought all obstacles and moved forward before seeing the first door to entrepreneurial opportunity.

“At that time, my target was only making myself rich. While studying, it was like one of my eyes focused on classes and the other looked for the ways to get rich. I realized that I should start a business when I was around the second semester of the third year or the first of the fourth year that I studied financing and accounting. I was learning about future value, the value of a current asset at a future date based on an assumed rate of growth, and realized that money depreciated over time. I saw rich people getting rich because they invested, so I started thinking of having a business. I set myself not going to work as an employee after graduation. I would sell something and get rich.”

After graduation, Benz has learned the key concept for making a business that it needs understanding and marketing in order to drive a business to success, not only the products.

“I had sold hundreds of products, from properties, houses to cars and more, and I hadn’t met any success. That was because I didn’t have deep understanding of those businesses. I did them because I just wanted to be rich. I invested in them without understanding their natures, so I ended up having nothing. At the time I did direct sales, I had credit card outstanding debts around a hundred thousand THB. My car that I had just bought was repo’d, making a big debt to pay. I also used to sell foods at the market. They all failed as I focused only on products. I sold sundried fish, Chinese pastry, crispy pork neck, and so on. They were delicious but their marketing was not good. They all consequently met the dead end. The sign of success came when I made brownies. There weren’t many brownie makers who sold online in that era, so I was a very first one. After I started doing the marketing on Facebook and paid for advertisement, it was like the right product met the right marketing. It grew up quickly. At first, I delivered brownies myself. I did everything myself, from taking orders at night, baking brownies in the morning to delivering in the afternoon. After a while, I sent by Kerry and had sales representatives.”

After trials and errors, crispy milk bread was born in this world. Benz had learned a lot of skills to improve his products and to survive in unexpected situations.

“At the time my bread gained popularity, there were customers in the waiting list for 6 months. I saw the potential to expand my business, so I got a loan to buy more baking ovens which cost around 7-8 hundred thousand THB per each. I talked to the manufacturer to help me, so he allowed me to pay installments for 3 months. In the second month, there was a white van stopping by in front of my rented house. There were district officers coming out who gave me the order to close my business down since my neighbor complaint about disturbing smell, heat, and noise emitted when manufacturing. I cried a lot that day. After that, I went to the district office negotiating to extend the order from leaving the house within 7 days to 14 days. With their mercy, I could have some time to find the new factory. I drove around crying and finding a new place to settle without readiness. As soon as we had got the place, we had to set everything from zero including FDA certification, sewage treatment system, and money for rentals which I borrowed from my sales reps as the bank didn’t approve my proposal. Thanks to the food safety knowledge that I studied from the college, the factory became more and more feasible. It took me 3 years before I could start exporting because the factory needed GMP and HACCP certifications (universal guarantees for food safety and good manufacturing practice) which required lots of time and paperwork for an audit.”

Nowadays, not only Thai people enjoy his crispy milk bread, business partners from Taiwan, South Korea, Malaysia, and other countries are also interested in his products. The adventure starting at home cooking that encountered business closure has traveled to a successful part having a globally certificated factory where crispy milk bread is produced and delivered to 3-4 thousand convenient stores nationwide and across the country.

For those who desire to own a business, Benz has left a message to remind yourself on the day you meet success.

“Currently, I still live in a rented house. With their curiosity, my subordinates asked me why I didn’t buy a house. I answered that I learned an important philosophy while running business with other SME owners. They taught me about lifestyle by comparing to having cars. They said if we own a Mercedes one day, we will not feel like driving Japanese cars again. That means if we extend our lifestyle now, it will be difficult to go down when unexpected events affect our business or financial status. Therefore, the more we live simply, the more we gain and collect for investment. Once our savings become assets or properties which make incomes, we could extend our lifestyle.”

“If we get into debts, it should be for returns not for lifestyles. A life without debts is the best.” 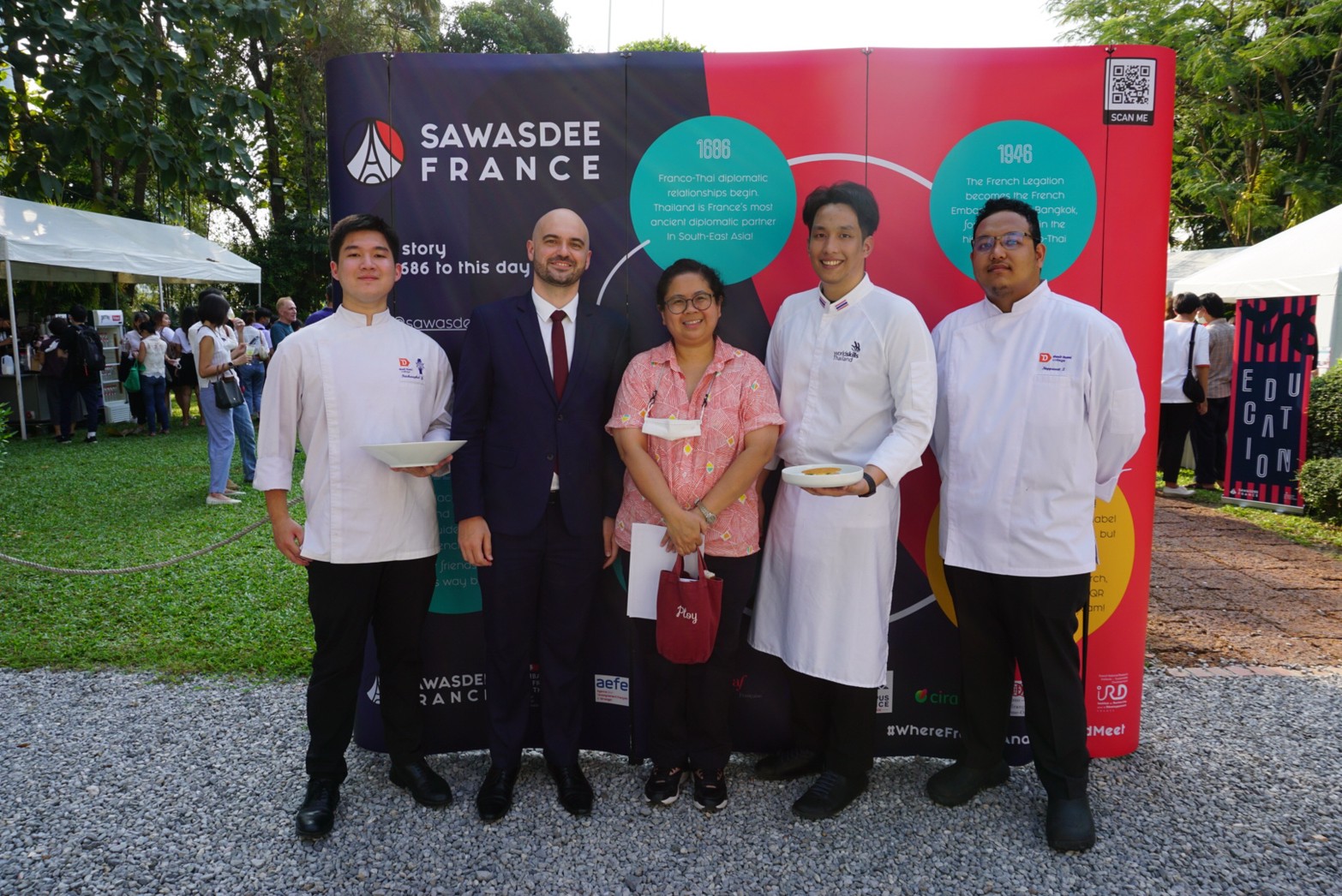 Dusit Thani College, a higher education institute specialized in hotel management, culinary arts, and hospitality under Dusit International, had recently participated in “Sawasdee France” at the Embassy of France in Thailand. 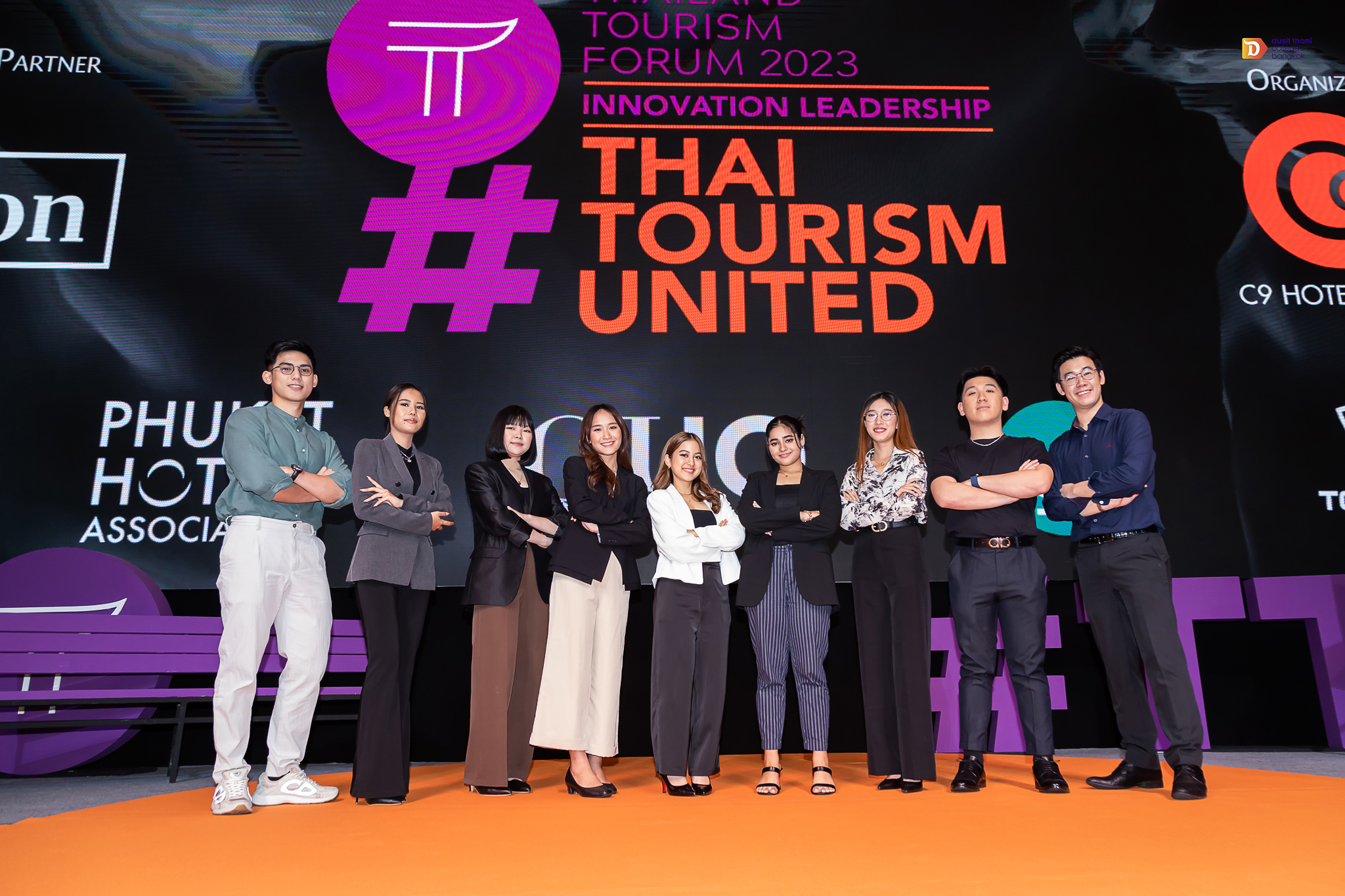 Dusit Thani College, the first higher education institute in Thailand devoting to giving knowledge and specialty in tourism and hospitality industry under Dusit International, was honored to have 9 students give English speeches in ‘Bang Bang Session’ this year, which has been the third year of the college. The students are the representatives of each bachelor program in the college e.g. Culinary Arts and Kitchen Management Program, Hotel Management Program, Tourism Service Innovation Program, Professional Culinary Arts Program (International Program), and Hospitality Management Program (International Program). They expressed their inspirations how they stepped into this industry.

ASEAN Hospitality Talent Fair will be held on 30-31 March 2023 in a hybrid manner at Srinakarin Hall, Dusit Thani College Bangkok

We’ll be happy to give you the information you need.

You have added a course